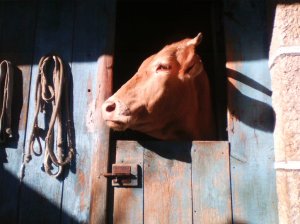 Galician Village life: Villagers roam lush fields, always a smile on their sun kissed faces, soft bleating of sheep in the background, complemented with chattering birds and chirping crickets. The epitome of Tranquility and Peace.

The village is full of rage.

It starts early in the morning with villager S, my neighbour. She will more often than not yell for her husband (Manueeeel) to either get out of the kitchen or come into the kitchen, go to the shed, or come out of the shed. Immediately.

The majority of the time you can hear pots or pans or buckets (or anything else that can clang  or bang) clanging from her courtyard, in echo of her voice which often goes into a near broken high pitch. They’ve changed her tablets again, she told me last week. Her nerves, you see, she whispered.

Villager S used to have a cow to take everything out on,  its skin a creamy milky white, hip bones jutting out like a bovine model. She had a holy air but was anything but. And running she could, with villager S ranting and raging behind her.  Because the stable wasn’t the place she wanted to be.

Villager J’s wife rages mainly at Villager J.  J is normally referred to as “useless” and her expression when talking about men in general makes it seem as if she’s genuinely flabbergasted about the fact that God created Adam, when Eve obviously could do it all better. Wherever something needs to be done, J will turn up too late or too wrong, or simply too J.

But the one who wins the rage race is Enraged Enrique.

Man of Epic Rants and Rage.  Imagine Basil Fawlty but then set in a Galician Village.

Enraged Enrique will always lend a helping hand where he can, will ask how things are and will agree the weather is terrible or lovely and he often smiles and brings me bags of apples if it’s the season.  He’s a highly skilled trumpet player, and in summer, doors and windows open, you can hear the sounds of trumpets drift along the heat haze of the village lane.

Just don’t get him to rage.

The vineyard next to the veggieplot I borrow, belongs to Enraged Enrique, and last summer I was digging up my potatoes while he raged against the vines. Their leaves were too leafy apparently.

His cows bear the biggest brunt. They walk too fast or they walk too slow, eat the wrong piece of grass or not enough grass.

And politics. Politics can get him into a near stutter rage, words laced with expletives spilling from his mouth.

”If it’s not our government fucking us over, then it’s the wild boar digging up our potatoes.” Epic words from Enraged Enrique.

He became ill a few years ago, and was in hospital for a while. There was talk he had to sell his cows. But he returned.  I told him to stop scaring us so much, with being ill and in hospital.